In February 2019, Children’s Services celebrated the achievements of Devon’s social workers and team managers who were nominated in the Social Worker of the Year Awards 2018. 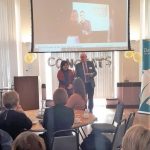 The Social Worker of the Year Awards were established in 2006 to recognise and celebrate the achievements of social workers, promote social work and incentivise individuals and teams in the social work profession to achieve excellence.

On 6 February our Chief Officer for Children’s Services, Jo Olsson; our Chief Officer for Adult Care & Health, Jennie Stephens; our Chief Executive, Phil Norrey; Leader, Councillor John Hart; and our Cabinet Member for Children’s Services, Councillor James McInnes hosted a celebration event for social workers who had been nominated, shortlisted or had won an award at the Social Worker of the Year Awards 2018.

The event also welcomed Colum Conway, Chief Executive Officer of Social Work England, which will be the new, specialist regulator for all child, family and adult social workers in England this year. Colum was delighted to say a few words about the significance of the awards, and the importance of the work that social workers do each day. Colum then spent the afternoon in Devon visiting social work teams across Children’s Services & Adult Care and Health.

Councillor John Hart and Councillor James McInnes presented certificates of achievement to each of our nominees to recognise the incredible achievements and amazing hard work that our social workers put in all year round.

Watch Sivanesan as he tells us about winning his Silver Award for Student Social Worker of the Year:

“We are very proud of our social workers for being nominated for these national awards, it is fantastic to see them being recognised for the hard work they put in each day. This celebration is very important to us, so that we can give a little something back to those who give so much to the people in Devon.”

“I was delighted to have been invited to be a part of this event for our social workers, it’s important for us to acknowledge how much we appreciate all they do for people in Devon. And to say thank you for all their hard work looking after the vulnerable in the County.”

Councillor Andrew Leadbetter unfortunately couldn’t attend the celebration event, however he did send in a video message:

Nominations for the 2019 Social Worker of the Year Awards will be opening at the end of March (keep your eyes peeled for more information soon). We are looking forward to building on our previous success.

Congratulations once again to all our nominees!